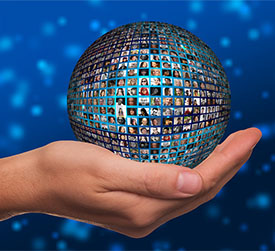 Back in the 1980s, no one had computers; we had rotary telephones; the main networks offered us three or four TV channels. The world was less connected and less informed. Travelling overseas was unusual, and travelling long-haul unlikely for most. Most people dealt with banking in branches with passbooks and cheque books.

In the 1990s, this changed. Many people started getting a computer in the home, a vision driven by Bill Gates. TV was still limited, unless you spent money on getting a chunky satellite on the top of your house. The world became more accessible as budget airlines launched. And the first call centre banks and, by the end of the decade, internet banks launched.

In the 2000s, people were networked, the world had globalised and the world was at peace. The internet became the backbone of how society connected. Mobile telephones became prolific and, by the end of the decade, smartphones. YouTube was rapidly becoming more popular than the BBC and NBC. Hopping on and off an aeroplane became a no-brainer thanks to the likes of Ryanair and Southwest Airlines. And banking collapsed thanks to complex derivatives. Trust in banks went through the floor, laying the seeds for the rise of FinTech.

In the 2010s, society changed again. People connected globally, but the world went back to behaving locally. Black Lives Matter, Greta Thunberg, David Attenborough and discussions of climate emergency, civil unrest and economic issues seemed to fill the news every day. Internet was now a human right, and creating your own media rather than consuming government media is the rage of the day. More photographs are taken every day than were ever taken in all of human history and jumping on a flight was like jumping on a train. FinTech and new digital currencies were the mainstream discussions, and banks? What’s a bank?

Now we are in the 2020s. A pandemic, runaway inflation, recessions, massive losses on investments and another decade of trials, struggles and consternation. Small businesses have never been challenged more, but then most people have never been more challenged. The threats of bad things – the world ending, going bankrupt, wars and the use of nuclear weapons – have never been more real. And yet things for the average Joe and Jane – or should I say they, he or her – goes on, as does technology.

Society in the 2020s is developing into a more local and protective vision. The lockdowns have made us home buddies, and the idea of globalisation is disappearing. We still want to travel, but we are nervous about travelling. We are a nervous species. Wars have been happening throughout the last fifty years, but they’re getting bigger and nearer. Suddenly, thanks to the conflict in the Ukraine, America and Europe’s battle lines are being redrawn. China has become a visible threat to the Europe and American alliance, whilst Russia is a pariah.

Society is worried, but continues to behave differently. Activism is far more rife than ever before. Activist movements like Extinction Rebellion are rife, because people no longer believe in politicians – they believe in the power of the network.

The main street is dying, the malls are empty, the physical is dead. Consumers have doubled-down to become all digital. This has been driven by lockdown. You can’t have much fun if you can’t go out, but you can still watch Netflix and buy stuff from Amazon.

All of this has culminated in a massive social change from physical to digital. In banking, it has created a mass move … or has it? Not really. Banking is a strong and stable market. Consumers and businesses want reliability and resilience. In fact, in the 2020s, consumers and small businesses are better served than ever before but, primarily, by traditional banks who are integrating FinTech ideas.

The future? The future society?

The future society will take this one step beyond. We are about to become a multiplanetary society. Space tourism is already a thing, and a space hotel that is a bit like the International Space Station is already being built. Balloon flights to space and back in a few hours are possible, and the idea of humans settling on Mars is becoming more and more of a reality every day.

The future society will be one where any human, anywhere in any part of our universe, can sit and chat, and trade and transact, because they’re connected. The biggest issue is going to be if the connection breaks down.

Nevertheless, when I think about generations before us, they had no idea. Just think, two centuries ago, most people were not educated. They couldn’t read or write. Today, most countries encourage a basic level of education. Some countries ensure it.

The more people who can read and write and communicate, the better the world becomes? The more the world progresses. The more we know, the better we get? I ask this as a question, as our globally connected world of social media and networking allows all of us to find out everything, everywhere. Does this make our world better? I don’t have the answers, just raising the questions, but if I did try to answer I would say, yes. Our world is better because our ability to read, write and communicate, allows us to understand each other better. The more we talk, the better we become.

As the eternal optimist, the future society feels like it will be one globally connected, globally communicated and with a global currency based upon a global network. We will all be assimilated and spend our holidays on Mars and our birthdays on Venus. Well, the men may go to Mars and the women to Venus at the very least.