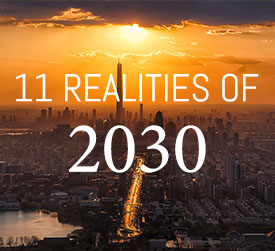 If we could jump time and skip into 2030, what would it look like? To be honest, it would look a lot like 2022, except a few big changes to society and technology.

People talk about time travel a lot. Hollywood loves it. Going back in time or forward in time is really popular. Switching bodies between a young you and an old you is often a theme. Being able to jump time is great fiction. And yes, it’s a fiction but, if I could jump time and skip into 2030, what would it look like? TBH, it would look a lot like 2022, except a few big changes to society and technology (I’m not going to get into Politics and Economics). The below link shows “A Future Prognosis for 2030” as a result of a single enquiry on the Shaping Tomorrow platform. A Future Prognosis of 2030

The first big change in society is that we are less trusting. Due to the pandemic of 2020, followed by the war of 2022 and then the Big Scam of 2025, people don’t believe anyone, anymore. We don’t believe the news channels, the politicians or even our own best friends. We just believe what we believe..

The second thing is that technology has taken over our lives. You may think that we are hi-tech in 2022 but, in 2030, our house, car, media and even our children and dogs run on technology. Most homes have a robot butler or maid, and 90% of humanity is connected to the network..

The third thing is that we don’t believe in government. We believe in the network. Bitcoin has just passed the million-dollar mark, but the users of bitcoin don’t care because the dollar is no longer relevant. The world has standardised on a global currency called the Wonk, and Wonkers rule. .

Fourth, our privacy is dead. Although we don’t believe in government, government believes in us, and monitors our every thought and movement. Networked monitors cover every street and highway; every message we send is recorded by the authorities; any conversations we have are heard by drone monitors in the skies; and any trip to the toilet can be scanned for what is wasted..

Fifth, what happened to Facebook? Oh, you remember that thing from the 2010s? It’s gone. We lost trust in that platform, which is why Friends Re-excited has become the thing..

Sixth, the weather isn’t great. It’s hot and muggy, and that’s in Norway. The planet is warming, and we all feel the heat..

Seventh, clothes and fashion have changed. Because of the climate thing, we are all wearing shorts and t-shirts. No one wears a suit and tie anymore, except for politicians, who we don’t trust because they wear a suit and a tie..

Eighth, we’re all learning to speak Chinese, because China rules the world. After Russia’s demise and the American loss of face over everything, President Xi doubled-down on the Belt and Road policy and made friends with everyone, everywhere by sprinkling money. Funny how that works..

Ninth, what happened to the television? Oh, it’s no longer there. Everyone watches media on devices and the sales of TVs collapsed in 2028 … as did the viewers of TV channels. Amazonflix rules! (do you remember when Amazon took over Netflix?). .

Tenth, have you been to the Moon yet? Last year, over a thousand Earthlings took a quick round trip to the Moon on Virgin Holidays. Add to that SpaceX Trips and Blue Origin Tours, and most people are now considering two weeks in space rather than two weeks in Disney..

Eleventh, if you can’t afford to go to the Moon, did you try out Virgin VR? We did and the exciting news is that you can feel like you’re on the Moon even when you’re on Earth! Even more, try out Friends Re-excited’s platform Lifex. You can live another life, not just this one … the only issue? You have to eat..

The list goes on as does the world. We progress and develop and do things differently, except that we are all still human. So, the one thing that hasn’t changed in 2030 is that we still have relationships, family, friends, love and each other. Isn’t that important too?

Chris Skinner is a Co-Founder of Shaping Tomorrow and an independent commentator on the financial markets through his blog, TheFinanser.com, as author of the bestselling book Digital Bank, and Chair of the European networking forum the Financial Services Club. He has been voted one of the most influential people in banking by The Financial Brand (as well as one of the best blogs), a FinTech Titan (Next Bank), one of the Fintech Leaders you need to follow (City AM, Deluxe and Jax Finance), as well as one of the Top 40 most influential people in financial technology by the Wall Street Journal’s Financial News.
Forecast: